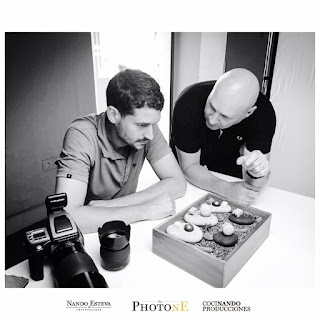 Chef Marc Fosh is one of Europe’s most exciting and creative cookery talents and without doubt one of Britain’s most successful culinary exports.
Living and working in Spain since 1991, he developed his own unique style of cuisine focusing on fresh ingredients and quality of produce, to which he adds a touch of inspired genius. The result is a modern, yet simple cuisine with clean tastes and big flavours. In 2002, Marc became the first and only British Chef to be awarded


a Michelin Star in Spain at his eponymous Marc Fosh Restaurant in Palma de Mallorca.

Nando Esteva is a one of Spain’s top food photographers and combines extensive experience in advertising with personal art projects that have received awards in some of the most prestigious international competitions such as IPA Los Ángeles, Px3 Paris, Florence-Shanghai, One Eyeland and the Spanish Lux. Many of his works are linked to gastronomy, such as “Punk Food”, “Carpentry Seafood” and “The Modern”. www.nandoesteva.com