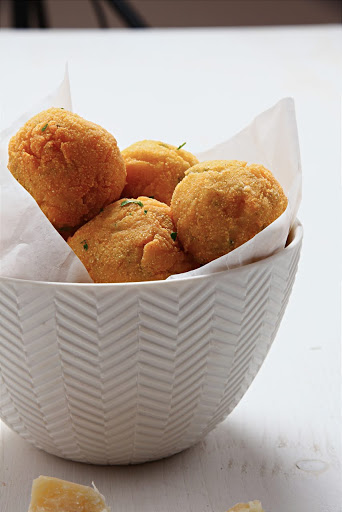 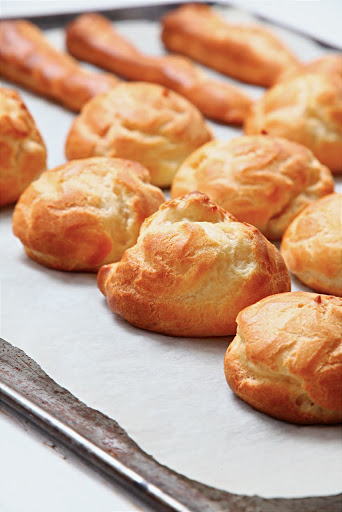 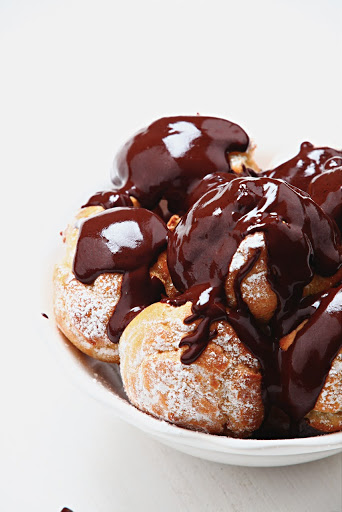 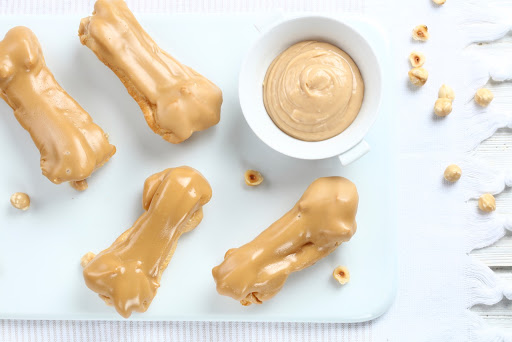 “Some dessert connoisseurs may try to argue that Pâte choux is the ultimate, French, classic Pastry recipe”

There is no doubt that Choux pastry is one of the lightest, crispiest pastries around. It is also so versatile and can be used in so many different ways both sweet and savoury. It has a reputation for being difficult to master, but in fact it’s so easy once you know the proper technique its almost child play. A pre-heated hot oven is essential to rise and set the choux and if you take it out of the oven before it’s cooked thoroughly it will collapse. Any filling should not be added until the last possible moment because it will make the choux pastry sag.

It’s made with plain flour, salt, butter, eggs, milk and a little sugar (if it’s being used for a sweet dish). Instead of a raising agent, choux pastry is puffed up by steam. It is used to make wonderful profiteroles, éclairs and forms the basis of the dramatic classic French dessert Gâteau St Honoré. It can also be used for savoury pastries such as Gougère, a large ring of choux flavoured with Gruyère or Emmental cheese and Gnocchi Parisenne (small poached dumplings masked with cheese sauce and gratinated). Little Choux buns are also perfect for savoury canapés stuffed with anything from tuna, smoked salmon, cream cheese and avocado. I Love to make “Pomme Dauphine”. These are delicious 'beignets' morsels, and are ideal served as an alternative to roast potatoes. Although they take some work, most of this can be done the day before if necessary. They are effectively choux pastry and mashed potato balls - deep fried; and can be turned into cheese puffs if 300g of grated Gruyere is added to the mixture just before frying.

It is said that a chef by the name of Panterelli invented the dough in 1540. He used the dough to make a dessert called Pâte à Panterelli. Over time, the recipe of the dough evolved, and the name changed to Pâte à Popelin, which was used to make Popelins, small cakes made in the shape of a woman's breasts. Then, in the eighteenth century, another French pastry Chef created what were then called Choux Buns. The name of the dough changed to Pâte à Choux, as the buns resembled little cabbages.

I love profiteroles stuffed with pasty cream and served with hot chocolate sauce. It’s such a classic!

a pinch of salt

a knob of unsalted butter

Slowly warm all the ingredients together over a gentle heat and mix well. Do not bring to the boil:

To make the Pastry Cream – Bring the milk and vanilla to the boil in a heavy bottomed saucepan. Whisk together egg yolks, sugar, cornflour and flour. Pour over the hot milk. Return to the heat whisking all of the time until the mixture thickens. Remove from heat and pass through a fine sieve. Allow to cool.

To make the choux pastry-Put the water, butter and a pinch of salt into a medium pan and gently heat until the butter melts. Turn up the heat and bring to the boil. As soon as it's boiling, tip in the flour in one go. Beat quickly to combine well, over the heat, until the mixture turns smooth and glossy and starts to come away from the edge of the pan. Tip the mix into a bowl and allow to cool a little. Beat in the eggs a little at a time.

Heat the oven to 200c/fan 180c/gas 6. Line a couple of baking sheets with baking parchment, put a medium nozzle into a piping bag and spoon in the pastry mix. Pipe walnut-sized balls onto the baking sheet, and then bake for 20-25 mins until golden. Leave to cook on a wire rack.

Once the profiteroles and filling are cool, put the pasty cream into a piping bag and pipe into the balls. Arrange them in dishes or a bowl and pour over the hot chocolate sauce.

These crisp, cheesy Beignets make perfect canapés but can also be a great vegetarian dish or a garnish for soups

Bring the water to a simmer with the butter, then remove from the heat and add the flour

Remove the mixture from the heat and stir in the grated Parmesan. Beat the egg yolks with the whole egg and slowly mix in the eggs to the mixture. Add the herbs, paprika and season to taste.

Pipe balls of the mixture onto a tray of polenta and roll to coat the beignets. Heat the vegetable oil to and deep-fry the beignets for 2 minutes on each side until crisp.

Drain well on a paper towel before serving.

To make the choux pastry-Put the water, butter and a pinch of salt into a medium pan and gently heat until the butter melts. Turn up the heat and bring to the boil. As soon as it's boiling, tip in the flour in one go. Beat quickly to combine well, over the heat, until the mixture turns smooth and glossy and starts to come away from the edge of the pan. Tip the mix into a bowl and allow to cool a little. Beat in the eggs a little at a time.

Line a couple of baking sheets with baking parchment, put a medium nozzle into a piping bag and spoon in the pastry mix. Pipe 7cm lengths of pastry, leaving lots of space for expansion and bake in the oven for 20 to 25 minutes or until crisp and pale brown. Take the éclairs out of the oven and make a little hole in the underside of each one to allow the steam to escape. Return the éclairs to the oven to dry out for 2-3 minutes. Put them on a wire rack and leave to cool completely. Make the icing by mixing the sugar with the coffee.

Whip the cream then add the nutella. Put in a piping bag fitted with a medium nozzle and stuff each éclair by piping in cream through the hole in the underside (or carefully split the éclairs in half lengthways and spread the cream inside). Dip each éclair in the icing so that the top is neatly iced, or spread it on with a butter knife. Leave the icing to set and eat within a couple of hours.