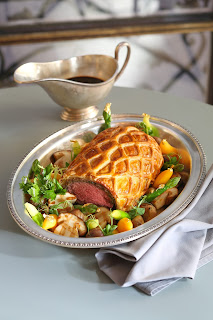 OK, Iet’s be honest. The British may not have the kind of culinary heritage that legends are made of, but there are a few exceptions and we do probably have the ultimate show-off beef dish in the guise of Beef Wellington…a butter-soft, ruinously pricey cut of beef fillet smothered in a rich, potentially even truffled mushroom mixture, spiked with madeira wine and topped, in its most glorious incarnation, with a decadent slab of foie gras. Apparently it goes back to Waterloo, and no, the dish was not named after an ABBA song; it is however believed that it got its name from Arthur Wellesley, the first Duke of Wellington, who defeated Napoleon at Waterloo in 1815. It’s a dish that has graced the tables of many of restaurants the world over, and it isn’t going anywhere any time soon!

This week we’ve been cooking Beef Wellingtons for our Fosh Food at Home delivery service and I really think that nothing symbolises a special occasion like a perfectly pink beef fillet covered in mushrooms and then wrapped in a pancake and puff pastry. It can be a complicated dish to get exactly right as it does require a little military timing, precision and planning, but all that effort will definitely be well rewarded and I personally think it’s a dish well worth making very now and then. Also, its reputation as a difficult undertaking has been substantially reduced in recent years, mainly by the availability of frozen puff pastry. I prefer making my own pastry, but frozen puff pastry is perfectly acceptable and far easier to work with that any pastry you can make yourself. The second innovation is that, rather than serve the fillet whole, it has become common to make individual servings. This takes a bit longer to put together, but is much easier to cook and serve.

In this recipe I’ve replaced the pancake with thin slices of Serrano ham.

2 egg yolks, beaten with 1 tbsp water and a pinch of salt

For the mushroom & spinach duxell:

Wrap each piece of beef tightly in a triple layer of cling film to set its shape, then chill overnight. Remove the cling film, and then quickly sear the beef fillets in a hot pan with a little olive oil for 30-60 seconds until browned all over and rare in the middle. Remove from the pan and leave to cool.

Finely chop the mushrooms, shallot & garlic. Melt the butter and olive oil in a large heavy-bottomed saucepan and add the mushroom mixture and fresh thyme.  Cook over a gentle heat for 10-15 minutes, stirring occasionally, Add the cream and continue to cook until the duxells resembles a thick puree and all the excess moisture has evaporated.

Add the parsley and stir in the baby spinach leaves. Remove the duxelle from the pan and leave to cool.

Cut the pastry in half, place on a lightly floured surface and roll each piece into a rectangle large enough to envelop one of the beef fillets. Chill in the refrigerator. Lay a large sheet of cling film on a work surface and place 6 slices of Parma ham in the middle, overlapping them slightly, to create a square. Spread half the duxelle evenly over the ham. Season the beef fillets, then place them on top of the mushroom-covered ham. Using the cling film, roll the Parma ham over the beef, then roll and tie the cling film to get a nice, evenly thick log. Repeat this step with the other beef fillet, then chill for at least 30 minutes.