HOG IT!
Pork is, perhaps, the supreme winter meat and has some wonderful cuts for stuffing and roasting. The tender fillets and loins, prized for their white, succulent meat, are perfect for pan frying or grilling and it also has some excellent, flavoursome odds and ends in the shape of trotters, knuckles and cheeks for braising and rich stews. Ribs are a relatively cheap cut of pork as they contain a smaller ratio of meat to bone. The discarded bones from chops are sold as spare ribs - pieces that have some meat, but not enough to be classed as proper chops. These can be marinated and grilled or barbecued. Ribs are also cut and sold in the same way as chops, with quite a large amount of meat still on the bone. The rib joint of pork contains more meat and can be treated like the rack of lamb as a piece that's ideal for open roasting or glazing and can be carved easily between the ribs so long as the chine bone is removed.
Gone are the day’s when pork was considered a rather inferior substitute for more expensive meats and pork is now the favourite meat in Spain. Nothing goes to waste as just about every part is put to good use in the making of sausage-like "Embutidos" (charcuterie). Among these are Chorizo, Salchichon, Morcilla, Butifarra, Sobrasada and off course, cured hams, Spain's most outstanding meat product. The most highly prized are those of jabugo" (Huelva), Guijuelo, Salamanca and Extremadura, made from the black Iberian pig (pata negra),
The "Cerdo Iberico De Bellota" are dark-coloured animals with longer legs and leaner haunches than the domestic pig. They roam free, feeding on acorns in the oak forests of Andalusia and extremadura. These acorns impart an intense, aromatic flavour and give the finished ham its unmistakable taste and texture. The art of producing top quality hams is a complex process regulated by strict controls as the legs are first salted and then hang to mature for a period of between 18 months to 3 years. The best hams should have a shiny dark red-brown colour, speckled with tiny white flecks from eating fatty acorns. 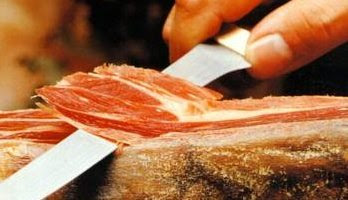 They should be sliced into almost transparent, wafer thin rashers from the leg and eaten immediately. A special support is used called “Jamonero" and a very sharp knife with a long narrow blade.
Pigs today are bred leaner and slaughtered younger than they used to be so when cooking lean cuts such as fillet and loin, care should be taken not to overcook them. The meat can sometimes be a little bland so it’s always a good idea to spice your pork up a little in Chinese style stir-fries, Thai curries or Cajun chilli dishes. 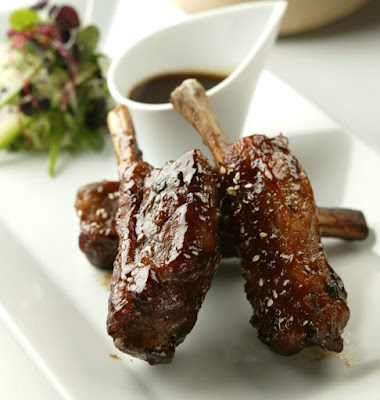 Place the ribs in a large bowl and dust them lightly with seasoned flour. Fry the ribs in hot oil for about 2-3 minutes and drain well to remove the excess oil. Bring the chicken stock to the boil in a large heavy-bottomed saucepan. Dissolve the corn flour in a little cold water and whisk in to the boiling stock. Add the rest of the ingredients and turn down the heat to a gentle simmer.
Add the ribs and cook for 45 minutes until tender. Remove from the heat and leave to cool in the liquid. To serve: Remove the ribs from the sauce and roast the ribs in a hot oven for 10-15 minutes until crisp. Serve with a big green salad and plum sauce for dipping.
Kitchen Basics Marc Fosh Mediterranean Food Pork