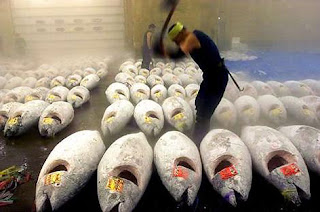 The world's appetite for tuna appears insatiable and tuna populations worldwide are in serious decline. At both of our restaurants we have decided to remove tuna from our menus while we debate a sensible way forward in an attempt to understand the problem better and look at viable alternatives.

It is a difficult decision for any Restaurant as Tuna remains a very popular item, but we feel strongly that something has to be done. We encourage comments and look forward to the views of our cliental and anyone who is passionate about this controversial issue.


The End of the Line is a powerful film about one of the world's most disturbing problems - over-fishing.

The End of the Line :: Home Page