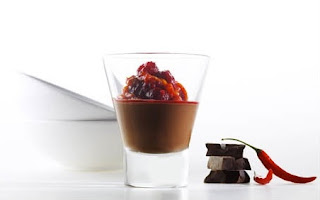 If chocolate ever went out of fashion, and if it did, nobody bothered telling me, it is certainly back with a vengeance now. Over the last few years there has been somewhat of a chocolate revolution happening in Spain with several, forward-looking companies springing up and selling amazing designer chocolates full of weird and wonderful combinations and off the wall flavours such as black olive, balsamic vinegar and parmesan cheese. Names such as the Chocolate Factory, Cacao Sampaka, Chocovic and Enric Rovira, with their high quality products and modern, sleek packaging have helped, once again, to make Spanish chocolate makers the envy of the world.

Once known as ‘the food of the gods' in Aztec culture, the story of chocolate really began with the discovery of the Americas when Columbus returned in triumph and laid before the Spanish throne a treasure trove of strange and wonderful things. No one could ever have imagined how important chocolate and their bitter cocoa beans would become. By the 16th and 17th century’s, chocolate was the favoured drink in most of Spain’s private houses. For most of that time, it was prepared mainly by local monks in their cloisters and monastery kitchens. They overcame the strong, bitter taste by adding sugar and vanilla, making the drink much more palatable and it quickly became popular throughout the whole of Spain. Chocolate houses known as “Chocolaterias”, similar to cafés began to appear everywhere and even today, these “Chocolaterias”, where nothing but hot chocolate and pastries are served, still exist in most of the country’s major cities.
“Churros” are probably Spain’s best loved pastry item and they are the perfect accompaniment for this thick, luscious chocolate drink, especially when the excesses of a long night out have left you feeling more than a little delicate the morning after… “Chocolate con Churros” really hits the spot.

Chocolate also finds its way into various savoury dishes throughout Spain and is often paired with game such as partridges, quails, hare and venison. When cooking with chocolate, extra care should be taken to ensure the chocolate does not overheat. Break the chocolate up into small pieces and place them in a bowl. Bring a saucepan of water to the boil and remove from the heat. Place the bowl over the hot water, it should not touch the water, and let the chocolate slowly melt. Make sure you do not over stir the chocolate, as it will split easily if over worked. When adding other ingredients, try to make sure they are of a similar temperature as sudden changes in heat are also problematic.
Although it sometimes gets bad press and there's little doubt that chocolate is high in calories, recent surveys have also shown that high quality chocolate, with a minimum content of 70% chocolate solids can also be beneficial to health although most people go wrong by choosing mass produced "brand name" milk and white chocolate bars, low in chocolate solids and high in sugar, glucose that can be dangerous for your health, so always try to buy a good quality chocolate with a high cocoa count.

In recent years, Spanish Pastry Chefs such as the internationally renowned Paco Torreblanca, Albert Adria and Oriol Balaguer have all been at the forefront of a movement challenging and pushing the boundaries of imaginative chocolate desserts to new heights, but if you want to sample something less taxing and simple: whip up a little delectable drink, fry off some “churros” and start dunking.

For the olive oil truffle:
Bring the cream, milk and grand Marnier to the boil and remove from the heat. Break up or chop the chocolate and add to the warm cream. When the chocolate has dissolved, add the olive oil and mix well. Pour into 6 glasses and leave in the fridge to set for 4-6 hours

Roast the red pepper in a hot oven or place under a hot grill. Cook until the skin starts to blister and blacken slightly. Place in a bowl and cover tightly with cling film. Make sure it is airtight. The steam will help to remove the skin. When cold enough to handle, peel off the skin and discard the seeds. Cut the pepper into long strips.

To serve:
Mix the red pepper, raspberries, chilli & Olive Oil together in a bowl.
Remove the chocolate filled glasses from the fridge & divide the raspberries & peppers over the chocolate. Serve Immediately. 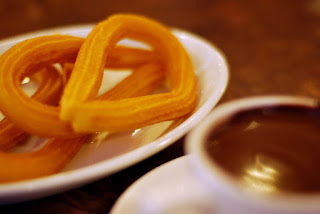 You will also need a shallow ovenproof dish, lightly buttered.

Place the chocolate, cream, rum, sugar, butter and cinnamon in a bowl set over a saucepan of barely simmering water, being careful not to let the bowl touch the water, then wait until the butter and chocolate have melted and the sugar has completely dissolved. Next, remove the bowl from the heat and whisk all the ingredients together.

In a separate bowl, whisk the eggs and then pour the chocolate mixture over them and whisk again very thoroughly to blend them together.

Preheat the oven to 180C/350F/Gas 4.
Bake in the oven on a high shelf for 30 minutes, by which time the top will be crunchy and the inside soft. Serve with a big scoop of vanilla ice cream
Chocolate fosh Kitchen Basics Mallorca Marc Fosh Mediterranean Mediterranean Food Modern Mediterranean slow food Spanish food