Some dessert connoisseurs may try to argue that Pâte choux is the ultimate, French, classic Pastry recipe. 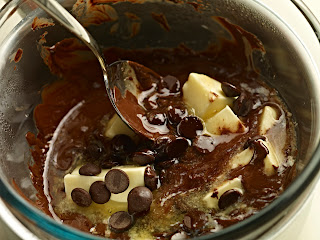 For me, there is no doubt that Choux pastry is one of the lightest, crispiest pastries around, it's also so versatile and can be used in so many different ways both sweet and savoury. For some reason, it has a reputation for being difficult to master, but in fact it’s so easy once you know the proper technique its almost child's play. A pre-heated hot oven is essential to rise and set the choux and if you take it out of the oven before it’s cooked thoroughly it will collapse. Any filling should not be added until the last possible moment because it will make the choux pastry sag.

It’s made with plain flour, salt, butter, eggs, milk and a little sugar (if it’s being used for a sweet dish). Instead of a raising agent, choux pastry is puffed up by steam. It is used to make wonderful profiteroles, éclairs and forms the basis of the dramatic classic French dessert Gâteau St Honoré. It can also be used for savoury pastries such as Gougère, a large ring of choux flavoured with Gruyère or Emmental cheese and Gnocchi Parisenne (small poached dumplings masked with cheese sauce and gratinated). Little Choux buns are also perfect for savoury canapés stuffed with anything from tuna, smoked salmon, cream cheese and avocado. I Love to make “Pomme Dauphine”. These are delicious 'beignets' morsels, and are ideal served as an alternative to roast potatoes. Although they take some work, most of this can be done the day before if necessary. They are effectively choux pastry and mashed potato balls - deep fried; and can be turned into cheese puffs if 300g of grated Gruyere is added to the mixture just before frying.

It is said that a chef by the name of Panterelli invented the dough in 1540. He used the dough to make a dessert called Pâte à Panterelli. Over time, the recipe of the dough evolved, and the name changed to Pâte à Popelin, which was used to make Popelins, small cakes made in the shape of a woman's breasts. Then, in the eighteenth century, another French pastry Chef created what were then called Choux Buns. The name of the dough changed to Pâte à Choux, as the buns resembled cabbages.

Choux Pastry is also fried to make Beignets and in Spain, it is used to make the classic “Churros”. They are probably Spain’s best loved pastry item and they are the perfect accompaniment for a thick, luscious chocolate drink, especially when the excesses of a long night out have left you feeling more than a little delicate the morning after… “Chocolate con Churros” really hits the spot.

PROFITEROLES
I love profiteroles stuffed with pasty cream and served with hot chocolate sauce. It’s a classic dish and it is now served the world over, we sometimes serve them at Misa Braseria.

Slowly warm all the ingredients together over a gentle heat and mix well. Do not bring to the boil:

To make the Pastry Cream – Bring the milk and vanilla to the boil in a heavy bottomed saucepan. Whisk together egg yolks, sugar, cornflour and flour. Pour over the hot milk. Return to the heat whisking all of the time until the mixture thickens. Remove from heat and pass through a fine sieve. Allow to cool.
To make the choux pastry-Put the water, butter and a pinch of salt into a medium pan and gently heat until the butter melts. Turn up the heat and bring to the boil. As soon as it's boiling, tip in the flour in one go. Beat quickly to combine well, over the heat, until the mixture turns smooth and glossy and starts to come away from the edge of the pan. Tip the mix into a bowl and allow to cool a little. Beat in the eggs a little at a time.

Heat the oven to 200c/fan 180c/gas 6. Line a couple of baking sheets with baking parchment, put a medium nozzle into a piping bag and spoon in the pastry mix. Pipe walnut-sized balls onto the baking sheet, and then bake for 20-25 mins until golden. Leave to cook on a wire rack.
Once the profiteroles and filling are cool, put the pasty cream into a piping bag and pipe into the balls. Arrange them in dishes or a bowl and pour over the hot chocolate sauce.

DAUPHINE POTATOES
This recipe is basically a mixture of mashed potato and choux pastry, deep-fried to golden deliciousness. I have been totally addicted to these ever since my first chef job when it was my job to make them as a young commis chef.

Sift the flour and salt into a bowl, to aerate it.
Put the liquids in a big saucepan over a low heat, and add the butter.
When the butter has melted, raise the heat to bring the mixture to the boil.
Quickly add the flour, stirring constantly to blend it well in, and so a smooth dough is formed. Cool the pastry slightly, then mix in the beaten eggs, a little at a time. The pastry should be shiny, but thick enough to hold its shape.
Meanwhile, put the potatoes in a pan, and cover them with water - adding a little salt. Bring them to the boil, and then simmer them for about 20 minutes - or until soft. Drain them, and leave them until they are completely dry.
Mix the potatoes and pastry mix well together with salt and pepper, plus a little nutmeg if desired. Heat a deep fryer to 190ºC/375ºF and the oven to 180ºC/350ºF/Gas 4. Scoop out dessertspoons of the mixture and fry them in the hot oil for about 2 minutes - when they should be golden brown. Remove them with a slotted spoon, and place on some kitchen paper to remove any excess oil. Serve immediately.
fosh Kitchen Basics Mallorca Marc Fosh Mediterranean Mediterranean Food Modern Mediterranean slow food Spanish food