“Life is like a pancake. No matter how flat or rough it is, it always has two sides…”

Let’s face it…who doesn’t like pancakes? They have been popular in some shape or form the world over for centuries and Archaeological evidence suggests that pancakes are probably the earliest and most widespread cereal food eaten in prehistoric societies dating back to 5th century B:C! 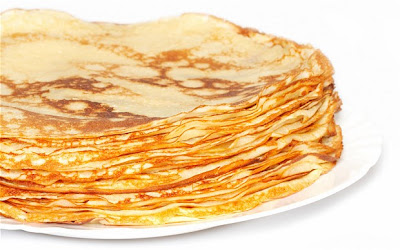 With their beautifully freckled surface, glistening straight from the pan, pancakes are delicious eaten simply with lemon juice and sugar, but they can be filled with a variety of sweet ingredients such as maple syrup, fruit, ice cream or chocolate sauce. They make a good base for savoury fillings too, such as fried mushrooms, cheese, spinach, seafood – anything goes really. Pancakes are made from a wide variety of flours and in a range of styles in many countries.

French pancakes are made slightly thinner and are called crêpes. Scotch pancakes are small and thick, usually cooked on a griddle and sometimes flavoured with sultanas or raisins. American pancakes are normally served at breakfast. They tend to be light and fluffy, served in generous stacks with bacon and maple syrup. There are also the Russian blinis, Chinese pancakes served with delicious Peking duck, Austrian Kaiserschmarm, Italian crespelle and so on.


The best known is pancake dish is probably crêpes Suzette, which are crêpes served with a sauce made from fresh orange juice, orange zest, sugar, butter and Grand Marnier that is flamed at the table before serving. I recently returned from a trip to southern India and I practically lived on Dosas, these are a vegetarian dish served across India, best accompanied with coriander, freshly chopped tomatoes and yoghurt.


I must admit that I love making Blinis (The Russian word for pancakes), they make a great party dish served with soured cream and smoked salmon. If you add a spoonful of caviar on top its pure heaven! Make batches of them as they freeze well.


If you invest in a proper crêpe pan, preferably non-stick, it can make preparing successful crêpes easier – it’s a short-sided frying pan about 20cm across. Crêpes can be served as soon as they’re made but they can be made in advance. If making crêpes in advance, layer each crêpe between sheets of greaseproof paper, then wrap them in cling film. Store them in the fridge (for use the next day) or in the freezer for up to one month. More often than not, the first one out of the pan is always less than perfect. The up side of this phenomenon is that the cook get’s to eat it warm, straight from the pan while the second and third are in progress. In practice, that first pancake seasons the pan, leaving a light film of butter on which those that follow will slide. Don't worry if your first attempts aren't perfect; you'll get better with practice When you see how simple it is to whip them up from scratch, you'll wonder why you never did it before.


A pinch of salt


Beat the eggs, milk, water, flour, grated lemon zest, salt and melted butter together in a bowl. Leave to rest for 10-15 minutes.Rub a non-stick frying pan with a little pork fat and place over a gentle flame. Pour a little of the mixture into the pan to form a thin film. Fry on both sides until golden and crisp around the edges. Remove and stack the pancakes on a plate. Continue until all the mixture has been used up.


Mix the sugar and ground cinnamon and sprinkle over the pancakes. Serve with honey.


Place the flour and salt into a bowl and crumble in the yeast.


Place the milk into a pan over a low heat and warm through. Do not boil. Pour the warm milk into the flour, mixing thoroughly to form a thick batter. Set aside for one hour.


removed. Fold the egg whites and chives into the batter mixture.


Heat a small amount of the olive oil in a frying pan over a medium heat.


Add a spoonful of the batter and fry for 50-60 seconds, until golden underneath, then turn over and cook for 30 seconds on the other side. Remove the blini and place onto kitchen paper. Repeat this process with the remaining batter. Keep the blinis warm.


To serve, place a spoonful of sour cream onto each blini, top with a


Slice of smoked salmon. If you want to be really decadent, add a spoonful of caviar and arrange on a large serving plate.