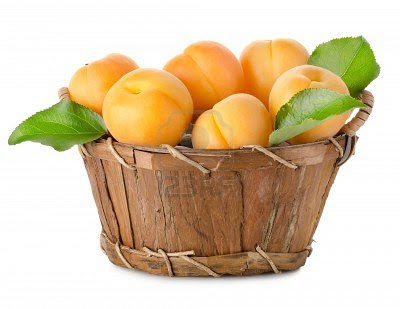 Before peaches, plums and berries appear in markets, apricots arrive. Ancient Romans were so impressed by this fruit’s early ripening that they took to calling it praecocium, Latin for “precocious.” Most apricots are destined to be canned or dried, and their season is short, so get the fresh ones fast.

A relative of the peach, nectarine, plum and cherry, apricots are sour-sweet in flavour with a wonderfully fragrant character and a mixture of fresh and tropical tones. They are silky smooth with a soft, velvety skin that ranges from pale yellow to deep orange. Although an apricot's colour is not always a reliable guide to flavour,

its best to steer clear of very pale varieties, and always avoid wrinkled or blemished skins. The flesh should feel moderately firm with some give so purchase plump, fairly firm apricots that are soft and juicy—they should also be eaten as soon as possible.

At this time of year apricots are just about the best fruit choice in local markets. Low in calories and packed with nutrients, just three fresh apricots will give you almost half the vitamin A you need for the day along with a healthy dose of vitamin C, potassium and fiber. In addition, apricots are packed with beta carotene, an antioxidant that helps neutralize free radicals that damage cells.

They have a great affinity to all diary flavours but also marry well with almonds, chocolate, vanilla and oranges. Apricots also work well with goat’s cheese, pork and off course lamb. One of my favourite all-time dishes is a lamb Tagine with apricots. Lamb and apricots both have a great rapport with sweet spices such as cinnamon, cumin and coriander. The intense sweetness and sharpness of the dried apricots cuts through the lamb’s fattiness and with the addition of spices, the end result is heavenly. This dish can be traced back to the thirteenth century and was featured in the “The Bagdad Cookery Book in a recipe called “mishmishiya” which means apricoty!

To ripen apricots, place the hard fruit in a brown paper bag for one or two days. Ripe apricots should be stored in the refrigerator to prevent over-ripening.
Fresh apricots can be frozen: just halve the fruit, remove the pit, and freeze on a baking sheet. Once frozen, place the apricots in a sealable plastic bag.

Another local fruit from Mallorca to look out for now are loquats or “Nisperos” as they are known in Spain. There are many varieties, each with a slightly different appearance. Generally, the loquat is pear-shaped, with smooth dark orange to orange-yellow skin. It has soft, creamy yellow flesh with a sweet and sour taste and 2-4 large seeds in the center. The two most common varieties in Spain are the Argelino (Algar) and the Tanaka. Loquats are in season during the months of April, May and June, and are generally enjoyed raw. Because it contains lots of pectin, it can easily be made into jam or preserves.

A Tagine of Lamb with Apricots

Preheat the oven to 160c
Warm the olive oil in a deep, heavy-bottomed baking dish and add the seasoned meat in small batches. Remove when it is browned nicely on all sides. Add to the pan the chopped onions and garlic. Stir regularly over medium heat and add the raisins, honey, saffron threads, stock, tomatoes, and apricots, then return the meat to the pan. Bring to a boil, season with salt and black pepper, then cover with a lid and place in the oven. Cook for two and a half hours.
Cut the preserved lemon in half and discard the interior pulp. Finely chop the skin and stir it into the tagine. Lift out the meat with a slotted spoon and boil the sauce over high heat until it is reduced and thick, then stir in the coarsely torn coriander and mint leaves. Return the meat to the sauce and serve with spiced couscous.

Beat the yolks, whole eggs and the sugar until it begins to thicken.  Add the corn flour and sherry.  Mix well.
Bring the cream and mint leaves to a boil.  Pass through a sieve.
Add the cream to the egg mixture.
Arrange the apricots in a shallow Pyrex dish. Pour the mixture on top and sprinkle with the sliced almonds.  Bake in a 180 degree oven for 15 minutes, until the mixture is just set. Dust with icing sugar and serve with ice cream.

Place all the ingredients in a blender and mix for 30 seconds. Pour over crushed ice and serve.