THE TASTE OF A MEDITERRANEAN SUMMER 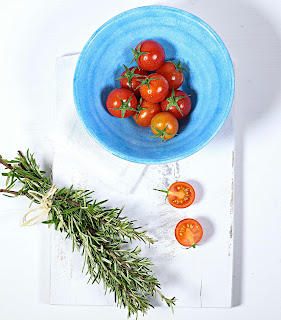 Juicy, vine-ripened tomatoes, grown in the Mediterranean sun, are the ultimate summer ingredient. Full of flavour, with a slightly aromatic scent, they are one of those magical ingredients, like high quality olive oil and lemons that make the others sing.
But not all that glitters is gold and good looks are often deceptive when you are buying tomatoes. If you can, pick them up and smell them as they should have an intoxicatingly pleasant aroma. Chances are if they smell of nothing they will probably taste of nothing. The stalk leaves should be fresh and green and the fruit should be firm with a bright, unflawed skin.
Never store tomatoes in the fridge as this impairs natural ripening and flavour, instead store them at room temperature. Over-ripe tomatoes will deteriorate even more quickly if chilled.

One of my favourite varieties is Plum tomatoes; these are oval-shaped with a firm flesh that is perfect for pizzas, sauces and cooking on the barbecue. They taste wonderful roasted whole with a little sugar, olive oil, balsamic vinegar and a sprig of oregano or summer savoury. Large Spanish beef tomatoes are ideal for stuffing and baking whole. They are also a fantastic salad ingredient with some sliced red onion, torn basil leaves, mozzarella and a generous drizzle of olive oil and balsamic vinegar. Although normally sold at a premium, tomatoes still attached to the vine are well worth the extra expense. It is the stem which gives the distinctive aroma rather than the fruits themselves but they can be picked when they are very ripe and generally have a better flavour.

For something different, what not try Raf tomatoes? They are obtained by selecting and crossing different breeds and are normally cultivated in greenhouses.
Unlike other varieties of tomato, the ripening process occurs from the inside out. So the best time to buy them is when Raf tomatoes begin to display orange streaks on the green skin. Everything is a matter of taste: as it matures, the reddish streaks on the green skin become a deeper red. The flavour is equally delicious, but you will sacrifice some of the crisp texture. 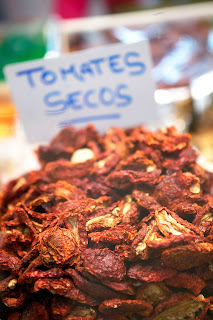 For a quick and delicious tomato dish, try the Mallorcan classic known as “Pa amb oli”: literally meaning bread with oil, the meal is something of a ceremony among locals these days. Simply crush the thin skinned “ramallet” tomatoes with a garlic clove, sea salt and a generous glug of olive oil and serve on a slab of rustic bread. A variety of toppings can then be added from slices of locally cured hams, chorizos to sobrasadas and cheese.
With an abundance of tomatoes around at the moment they are well worth preserving or drying as their concentrated flavour will almost certainly be superior to fresh during the winter months and you’ll get a true taste of a Mediterranean summer all year round.

Cut all the vegetables into dices, about 1cm thick.
Heat the olive oil in a large saucepan and sweat the leeks, celery, peppers and carrots for 6-8 minutes until softened. Add the potatoes, garlic, tomato puree, rosemary stalk and courgettes, and then top with vegetable stock. Bring to the boil and simmer for 10 minutes. Stir in the chopped tomatoes and macaronis, season with salt and pepper and simmer for 10 minutes until the pasta is just cooked. Remove the rosemary stalk and add the torn basil leaves.
Serve immediately, topped with freshly shaved Parmesan.

1          large onion, diced
2          cloves of garlic, crushed
2          aubergines, diced
1          red pepper, seeded and diced
1          yellow pepper, seeded and diced
200g    tomatoes, skinned, seeded and roughly chopped
1tbsp   tomato puree
2          courgettes, diced
100ml  olive oil
Fresh herbs
Seasoning
Heat the olive oil in a large saucepan and add the onion and garlic. Turn down the heat and sweat them slowly over a gentle flame for 2-3 minutes until they are soft and just turning gold. Add the diced peppers and gently cook for 5 minutes.
Add the aubergines, tomato puree and tomatoes; cook gently until the tomatoes are reduced to form a sauce. Now add the courgettes and cook gently for around 30 minutes, until the vegetables are just soft.
Season with a little salt and black pepper, add the fresh herbs and serve.