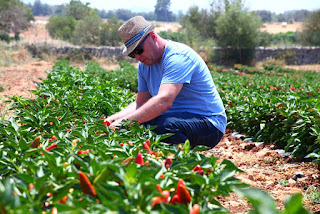 -->Paprika is one of those things that most of us take for granted, but its importance in Spain’s regional cookery cannot be overstated. It lends it’s deep, intense, sweet, spicy flavour to many of the country’s favourite dishes including “paella”, “habas a la Asturiana”, “sopa de ajo” as well as a multitude of “chorizos” and off course, local “sobrasada”. It is produced from cone-shaped peppers (capsicum annuum) that are ripened to redness and was introduced to Spain by natives of Hispaniola during Columbus’ second voyage to the New World in 1493. Hungarian scientist Dr. Szent-Gyorgyi was awarded the Nobel Prize in 1937 for isolating vitamin C in paprika. He also discovered that, pound for pound, paprika is a richer source of the vitamin than citrus and the red spice quickly became an important ingredient in preserving meats and sausages. 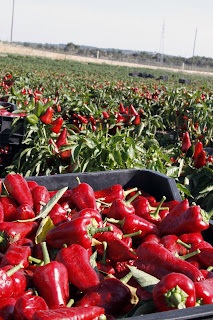 In the height of the summer visitors to the Island will notice the colourful red pepper “Pebre Bord” being gathered everywhere to make “Tap de Corti” (local Paprika). Indigenous to Mallorca, this pepper nearly became extinct but is now being grown in increasingly larger numbers all over the island. In days gone by the red pepper would be hung from pieces of string “enfilalls” to dry out in the sun. The walls of white-washed houses would be covered in these chains of red peppers gently swinging in the afternoon breeze as far as the eye could see across large parts of the island. 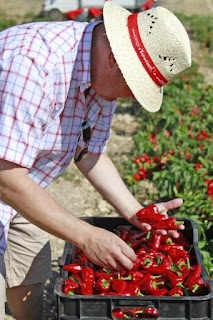 The traditional process to produce Tap de corti is complex. The peppers are dried in the sun over three to four weeks so that they do not lose their natural antioxidants and thus their capacity to preserve food. Afterwards they are put through a stone grinder six times, with a 24-hour period break in between for the pimento to cool down. After a sifting process the paprika is then ready to be packaged. Experiment with Tap de Corti to really attack the taste buds and use your imagination to give a spicy depth of flavour to anything from scrambled eggs to lamb, chicken and fish dishes.


Recently Mallorca's red pepper has gained official recognition by being entered into the national register for protected trade goods.


Having nearly become lost for so many years, “Tap de Corti” is now enjoying greater popularity than ever before...it’s easy to see why.


Wash the octopus in cold water. Bring a large saucepan of water to the boil with a good pinch of salt and a couple of bay leaves. Carefully place the octopus in and simmer for about 40-45 minutes until tender. Remove and drain the octopus. Cook the peeled potatoes in the cooking liquid for about


15 to 20 minutes. Cut the octopus in small slices. Remove the potatoes, slice and place them on a large plate. Cover with the octopus slices and pour over the olive oil. Sprinkle with Tap de Corti, rock salt and serve immediately.


Roast the red peppers in a hot oven until they start to blacken and blister. Remove from the oven, place in a bowl and cover tightly with cling film. Leave for 10 minutes and carefully remove the skin and discard the seeds.


Place the red peppers in a pestle and mortar with the stale bread and garlic cloves. Crush to a puree.