Confessions of a Chef 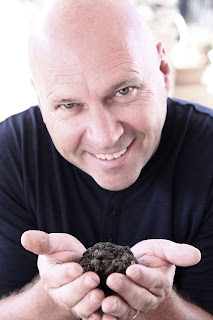 I have a confession to make. Some years ago I caused a major incident on an airplane and very nearly got kicked off for upsetting other passengers. Luckily for me, we were already 10,000 feet above the ground and there was no going back. No, I had not been drinking; no I didn’t get into a fight. I was traveling alone and I did not have a single conversation with anyone. It was my hand luggage that did all the talking! 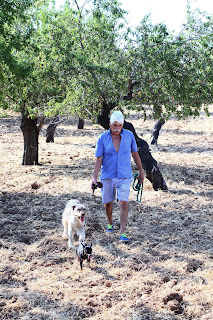 I had traveled to France in the search of buried treasure and a man who has dedicated his whole life to the pursuit of fresh truffles. After meeting the man and his dog, I just had to buy a few black pearls bring them back to Mallorca. “I’ll give you a special price for today’s truffles”, he said “40 Euros per gram.” It sounded OK, “I’ll take ten”, I replied. Cheerfully he scuffled off to the back, brought me a perfect little black truffle, and placed it on the scale. 60 Euros.  “OK.”  I declared and breathed deeply.  A little voice inside me was saying “Are you really going to buy ten, are you really that CRAZY? 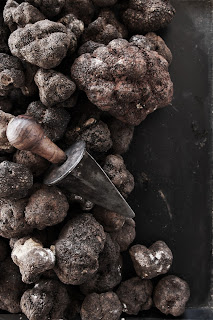 Finally I handed over a king’s ransom and left, feeling happy and nervous all at once. Having spent so much money there was no way I was going to let these black beauties out of my sight and I packed them neatly into my hand luggage. It was a very cold afternoon in France and no one could possible know about the hidden treasure in my hand luggage. That was until thirty minutes into our flight and the heating began to really kick in. At first there was just a slight aroma waffling around and I was relieved that no one else seemed to notice. But soon enough the whole plane was filled an aroma that Gareth Renowden once described in “The Truffle Book” as something resembling “Old socks and sex.” After a few complaints about the strange smell to the stewardesses I had to hold my hand up and confess that it was indeed my wonderful truffles that were causing so much offense…some people just don’t appreciate a culinary jewel when they smell one. 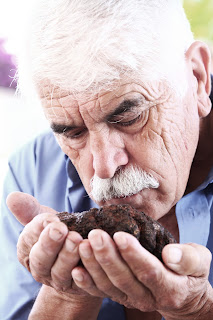 Truffles are off course a fungus and grow under the ground as a result of a symbiotic relationship with the roots of particular trees (such as oaks and hazelnuts). They can be found breaking the surface of the ground or down to 200 millimeters deep and are best located by a trained pig or dog, from the aroma they emit when ripening. The truffle then has to be assessed by a trained human nose to determine whether it is truly ‘ripe’ or should be left in the ground for another few days or a week before being harvested.

Truffles continue to be somewhat of a mystery even after more than 3000 years of consumption. The ancient Greeks loved them and they were highly prized by the Romans. Alexander Dumas in his Grand Dictionnaire de Cuisine wrote, “The most learned of men have been questioned as to the nature of this tuber and, after two thousand years of argument and discussion, their answer is the same as it was on the first day: we do not know. The truffles themselves have been interrogated and have answered simply: eat us and praise the Lord”

There are many different varieties of truffle and summer truffles (tuber aestivum) have just come into season and will be available from April to September.  They have a rough black exterior and brown flesh mottled with white veins, Summer Truffles have a delicate but distinctive aroma and are ideal for canapés, pasta sauces, eggs, potatoes, rice or meat and fish dishes.
With their enticing flavour, fragrant aroma, spectacular appearance and moderate price, Summer Truffles are tremendous value for money.

Black Winter Truffles (Tuber melanosporum) are available from November to march and have a distinctive and powerful aroma. You can find white Truffles from November to February and they have a golden exterior with delicate cream-coloured flesh and a strong musky, slightly garlicky aroma. They are almost never cooked but are usually consumed fresh, typically by being shaved into paper-thin slices over pasta, risotto or salad.
If you buy fresh truffles, store them in the refrigerator and they are best used within approximately one week after they arrive. A lot of cooks choose to preserve truffles is uncooked rice grains. The rice grains will protect the natural moisture in the truffles, while preventing them from getting damp from excess moisture that could start decay and the truffles in turn add their amazing flavour to the rice to produce a decadent, heavenly risotto.

In a small saucepan bring the chicken stock to a simmer.
In a separate heavy-based saucepan, heat the butter until melted and add the onion and garlic. Cook over medium heat, stirring, until the onion has softened, around 2 minutes. Add the rice, sage leaves and stir. Add a little hot chicken stock until the rice is just covered. Continue to stir until the rice has absorbed all the liquid. Over a medium heat, continue to add the stock gradually and stir until all the stock has been absorbed and the rice has softened. Add the mascarpone, truffle oil, grated pecorino and season to taste. The risotto should be light and creamy. Stir in the olive oil and serve with freshly grated truffle on top.