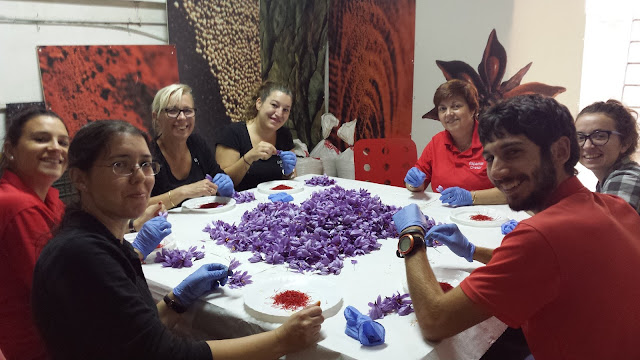 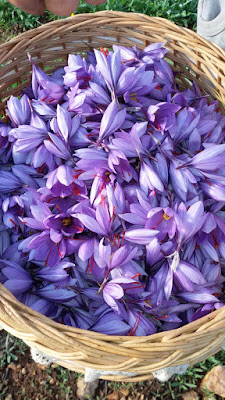 Spanish Saffron has been grown in La Mancha for at least 1,000 years and the region is now world-famous for producing the planet’s most expensive spice. Until recently we had to import our saffron for the restaurant from the mainland but all that changed recently when the Mallorcan company “Especias Crespí” embarked on a new challenge to expand and diversify its offer.  In 2016 they planted 20,000 plants in Vilafranca and in a few weeks time they will begin to harvest the second crop. But this is only the beginning, “especias Crespí” plans to plant up to 200,000 plants in four years in 4 hectares of land especially prepared for this crop. Their goal is to produce up to 25 kilos per year and the production will be one hundred percent ecological.

These bright red, changing to yellow stamens have been highly prized since ancient times when they were used to perfume bathing water and as a dye. The word ‘saffron’ comes from the Arabic ‘za'faran’ meaning yellow. It is said to have anaesthetic properties and has also been used as a remedy to sleeplessness and to reduce the effects of a hangover. It's also supposed to be a good aphrodisiac and put you in a happy mood. If you consider that 85.000 flowers are needed to obtain just one kilo of the stuff, it's hardly surprising why it’s so expensive. 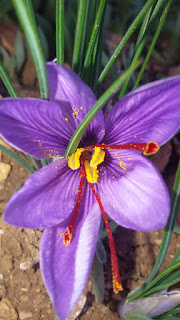 The Spanish make liberal use of saffron and it is used to flavour and colour many of their most famous rice dishes including paella.
It has an unusual, slightly bitter, earthy taste and gives food a faint aroma and an intense yellow colour. It appears in fish soups and stews all along the Mediterranean and works really well with fresh mussels, scallops, red mullet and Dover sole.
Being expensive, it is obviously best used sparingly, but a little does go a long way. Try to buy fresh, good quality saffron and avoid the powdered variety if at all possible. If you put a little into a pestle and mortar and add a tiny amount of warm stock or water you can pound the saffron to intensify the taste and colour before using.

Place the white beans and one garlic clove, bay leaves and fresh thyme in a large saucepan and cover them with cold water. Bring to the boil and simmer for 30-40 minutes. Place the fresh clams in a clean saucepan and cover them with the fish stock. Bring the clams to the boil and cook for 2-3 minutes until they open. Strain the clams, pass the stock through a sieve and add the liquid to the beans. Remove the clams from their shells. Crush the remaining garlic clove and saffron with the breadcrumbs to form a paste. Remove the beans from the heat and stir in the breadcrumb mixture and chopped parsley. Season to taste and serve immediately.

Place all the ingredients, except the peaches, in a heavy-bottomed pan and cook over a gentle flame, stirring frequently, for about 30-40 minutes until thick and syrupy.
Blanch the peaches in boiling water for 15 seconds and refresh them in ice cold water. Peel them and cut them into large chunks.
Add the peaches to the saucepan and cook for a further 10-15 minutes until the peaches start to break down. Pour into sterilised glass jars and store in the refrigerator for up to 6 months.