on July 04, 2020
At the restaurant we always offer a refreshing chilled soup during the summer months, and it’s invariably some form of Gazpacho. They are light and fresh, very healthy and utterly delicious! 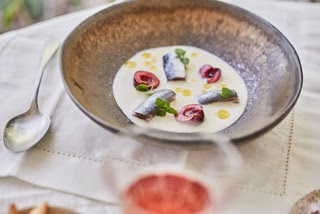 From humble beginnings, Gazpacho has gone on to be the most revered and well-travelled chilled soup in the world. This refreshing soup has provided nourishment, quenched thirst, and sustained a body working in the hot sun for centuries. It even got a mention in the classic novel Don Quixote by Miguel de Cervantes when it was first published in 1605 and Gazpacho has been part of the fabric of Spanish culture ever since. Apparently, Cervantes completed his masterpiece in prison due to irregularities in his accounts while working for the government so he was probably starving at the time and longing for some fresh, tasty food.

Long before tourism, Andalucía was the poorest region of Spain.  Gazpacho, like most of the regions dishes, was considered “food of peasants” and was originally made by pounding stale bread, water and garlic in a pestle and mortar long before the arrival of the tomato and the discovery of the new world. In modern time's, tomatoes, cucumbers and peppers were added and then spiked with a little olive oil and vinegar. This liquid salad is the perfect thing for long hot summer days.

Gazpacho is a breeze to make and keeps well for 2-3 day's in the refrigerator without a problem. I love making this nourishing and highly thirst quenching chilled soup. It has a certain reverence and ceremony about it. It's one of those dishes that the Spanish love to spend hours arguing about the best way to make and, although there are many variations, they all seem to contain garlic, olive oil and bread. Most Spaniards insist that all the ingredients should be mixed together and left to stand overnight in the fridge, as the day after, the flavours are more pronounced and defined.

The lesser known "ajoblanco malagueño", sometimes called "gazpacho blanco" (white gazpacho) is another delightful chilled soup from Malaga. The origins actually predate gazpacho by several centuries and date back to the invasion of the Moors who we also have to thank for our abundance of almonds here in Mallorca.  It is best made with freshly peeled almonds, a couple of garlic cloves, some white bread soaked in milk with a few drops of sherry vinegar and olive oil. It is extremely refreshing and is normally served garnished with fresh grapes. Another typical chilled soup is "salmorejo cordobes" and is made with stale bread, ripe tomatoes, egg yolks and olive oil. It is a thick, mayonnaise-like gazpacho that can also be used as a sauce or as a dip.

In the height of summer, nothing quite hits the spot like a well-made, thirst quenching Gazpacho and as the old Spanish refrain says, De gazpacho no hay empacho--there’s never too much gazpacho!

CHILLED ALMOND and GARLIC SOUP with MARINATED SARDINES and CHERRIES

FOR THE MARINATED SARDINES:

First, make the marinated sardines. Place the sardine fillets skin-side up on a large dish. Thoroughly combine the salt and sugar and completely cover the sardine filllets with the mixture. Transfer to the refrigerator to marinate for 1–2 hours.

Rinse the marinated sardines in cold water to remove all the salt, and then dry with paper towels. Transfer to a clean bowl, cover with olive oil and chill until required.

Meanwhile, in a heavy saucepan, combine the peeled almonds, garlic cloves, milk and water, and cook over a low heat for 30–35 minutes, until the almonds are soft and cooked through. Add the bread and cook for another 3–4 minutes. remove from the heat and leave to cool a little, then transfer to a food processor, add the sherry vinegar and blend to a purée. Whisk in the olive oil, season to taste, then pass through a fine sieve (strainer) into a bowl. Chill in the refrigerator for at least 3–4 hours.

To serve, pour the chilled ajo blanco into soup bowls and garnish with the marinated sardines and fresh cherries. Serve immediately.